1. All your art utopias are sustainable and in harmony with our planet. Do you want to sensitize people with your work to better deal with this earth other creatures and themselves?

By taking part in observations that sensitize human and nonhuman bodies to the reciprocal entanglements, we encourage ourselves to consider the ways in which the politics of the atmosphere might be re-imagined. The air above us constitutes of much more than that of the technosphere, and by sensing it we are reminded that earthly ecologies and forms of life will continue to be shaped by forces beyond the Earth and human impact.

My concern in this moment is about moving into a connected way of thinking and being together. Thinking about how we can rearticulate the level of engagement in the epoch we live in. 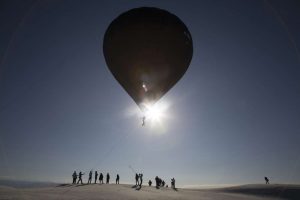 Living beings inhabit at the threshold of the cosmic scale of energy, breathing interplanetary dust intermixed with black carbon. While enterprises to colonize other planets are put in place, this very same interface between us and the sun, the atmosphere, continues to be highly compromised: carbon emissions fill the air, invisible radio waves develop in a hegemonic algorithm of dominance, particulate matter floats inside our lungs. We inhabit a world where breathing is not implicitly granted, but is becoming an asset. It is crucial to think of new practices among the disciplines that help to re-imagine the air, beyond the privileged breathing of the few…

Each breath echoes a myriad voices—human and non-human—and contains more than 25 billion billion molecules that float about constantly, faster than the speed of sound. Everything on Earth that makes sounds produces ripples of movement through the air, making our entire atmosphere act like a gigantic drum played by human and non-human beings together, echoing, exchanging, merging each other´s voices and rhythms, … 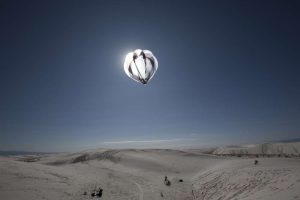 When we start to understand that breath becomes air, that the voices and the sounds we release interlace in the same air, and that “we live submerged at the bottom of an ocean of air,” as Evangelista Torricelli said, then we can speculate about potential socio-political, elemental tools and scenographies, modes of social practice that hopefully will cool the extra heat the air is carrying today, or that will make us aware of the few degrees of temperature difference that can make things fall upward, or lose gravity in a double-bound meaning of possibilities… while inventing a new vocabulary, new languages to engage with and re-sense the air we could all breathe.

I would say that we need to play with new categories that move us on from Homo economicus to the Homo sapiens tuned in to planetary rhythms, Perhaps something like a Homo sapiens flotantis , who would have learned to float in the air and drift with the wind, free from the borders built by fossil fuels…

Organisms are not atomistic individuals but are hybrid assem blages… each body is a “nested ecology” linked to other ecological bodies in complex ways. By thinking like this, we might notice our interconnectedness with other beings, and how we might cooperate across species boundaries… how we might live and thrive together on a shared planet.

2. Many different types of spiders live permanently in your studio in Berlin. What fascinates you about these animals and what can humans learn from spiders?

Crossing borders, whether across species, across disciplines or whatever, will lead to a broader view and better understanding on many aspects of life. In general, people should pay more attention to sense their environment and to ‘listen’ to other ‘voices’.
For a period of time we were looking at webs, for their architecture and structure, and then suddenly it was obvious, what about spiders? Most spiders are comparatively deaf and blind to most humans but still they know how to adjust their webs to the flight paths of the mosquitoes. 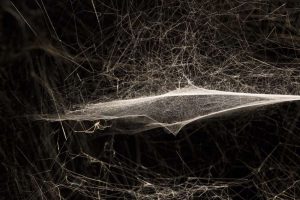 They can modify it according to the changes of flight paths. This means, they are connected somehow through a sensorial apparatus that we don’t understand yet, a way of sensing the world that listens and feels other voices. This is why we always use the ‘spider/web’ to describe both parts individually, and together, since you cannot separate one from the other for the spider/web. Hopefully we can learn with the spider/webs to attune to those which are shadowed by the inequality of today’s assembly. It’s like when you think about our phobias, arachnophobia, the phobia of dust…we always want to get rid of germs and bacteria. But then we come to realize that we are an assembly of all that, even our own bodies are a kind of hybrid, containing multitudes, which helps entangle our thinking outside of the human perspective. Lots of humans often concentrate on something while all the rest becomes very irrelevant to us. And that results in forgetting, or not seeing how everything is entangled in an ecosystem in constant becoming.

Spiders have been weaving cosmic webs for 380 million years on this planet … and so, we decided to stop brushing them away and give them microphones instead … Over the last decade our studio developed specialised web sonification and signalling devices that unveil the hidden musicality of the spider/web… we decided to pay careful attention to the life forms we share our environment with, amplifying unheard voices.

3. What are you currently working on? 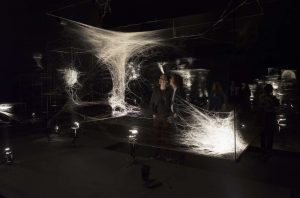 We are exploring a new epoch called Aerocene: a period of ecological awareness, in which we learn together to float, live in and with the air and reach an ethical commitment to the atmosphere and the earth.

Aerocene is an interdiscipli nary artistic endeavour that seeks to devise new modes of sensi tivity, thus reactivating a common imaginary so as to achieve an ethical collaboration with the atmosphere and the environment. Its activities are manifested in the testing and dissemination of lighter-than-air sculptures, which become buoyant only by the heat of the sun and infra-red radiation from the surface of Earth, without fossil fuels, helium, hydrogen, solar panels and batteries.

We are also thinking about alternative currencies as well, that could enhance emerging decentralised, autonomous organisation of the Aerocene project, we hope it will motivate actions towards fossil-fuel-free movement around the planet, and greater eco logical sensitivity. 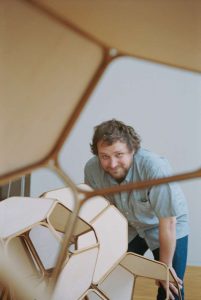 When we examine the blockchain technology we find information about the carbon footprint, implicit to mining in the system. So, we thought about a new term in relationship to our activ ities: de-mining the air with carbon-free solar flights, while using blockchain technology to foster community-driven changes tending towards a world free of fossil fuels.

We try to imagine an era of post-individualism and post-extractivism, fostering instead collaborative partic ipation. One which reverses this extractive approach humans have developed towards the planet, while re-examining the freedom of movement between countries… and learning to sense the atmosphere, which could open up the boundaries of the Earth and allow us to enter an interplanetary-cene. 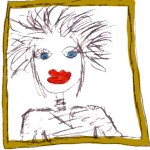 This website uses cookies to improve your experience while you navigate through the website. Out of these, the cookies that are categorized as necessary are stored on your browser as they are essential for the working of basic functionalities of the website. We also use third-party cookies that help us analyze and understand how you use this website. These cookies will be stored in your browser only with your consent. You also have the option to opt-out of these cookies. But opting out of some of these cookies may affect your browsing experience.
Necessary immer aktiv
Necessary cookies are absolutely essential for the website to function properly. This category only includes cookies that ensures basic functionalities and security features of the website. These cookies do not store any personal information.
Functional
Functional cookies help to perform certain functionalities like sharing the content of the website on social media platforms, collect feedbacks, and other third-party features.
Performance
Performance cookies are used to understand and analyze the key performance indexes of the website which helps in delivering a better user experience for the visitors.
Analytics
Analytical cookies are used to understand how visitors interact with the website. These cookies help provide information on metrics the number of visitors, bounce rate, traffic source, etc.
Advertisement
Advertisement cookies are used to provide visitors with relevant ads and marketing campaigns. These cookies track visitors across websites and collect information to provide customized ads.
Others
Other uncategorized cookies are those that are being analyzed and have not been classified into a category as yet.
SPEICHERN & AKZEPTIEREN